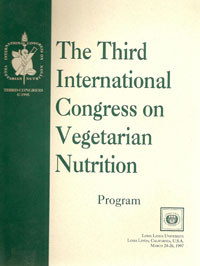 The 3rd Congress was held in March 1997 on the campus of Loma Linda University. Walter Willett gave the keynote address on “Vegetarian Diets: The Convergence of Philosophy and Science.” Thirty-four research presentations were made over the three days of the Congress. In addition, congress participants choose from six workshops on the applications of vegetarian diets. 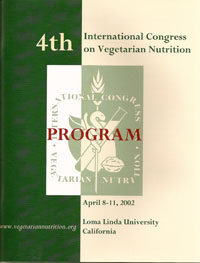 2008 marked the 5th installment of the International Congress on Vegetarian Nutrition continued to expand and offer cutting edge research and clinical information for the growing number of vegetarians world wide. The congress was held at Loma Linda University on March 4-6, 2008. This edition of the Congress was held in conjunction with the annual Healthy People Conference, sponsored by the School of Public Health alumni.

The 6th International Congress on Vegetarian Nutrition was held on February 24-26, 2013, at Loma Linda University. The comprehensive program covered core public health issues including chronic disease prevention using plant based diets, to exploring the influence of meatless diets on the environment. A range of issues from a basic science approach on the influence of plant based diets on the gut microbiome, to epidemiological studies of large cohorts of vegetarians, to practical and application of vegetarian diets were discussed. 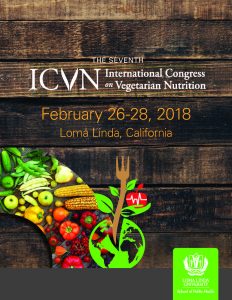 The 7th Congress was held on February 26-28, 2018 on the campus of Loma Linda University Health. Frank Hu, David Katz and Joan Sabaté each provided a plenary address during the congress. The theme of the scientific program was “Plant-based Nutrition for Personal, Population and Planetary Health.”